That’s just a terrible title and I apologise for it.

Monday and an Aurli start to the week (the gag is so bad I thought I should use it twice), I have been plugging away at the Aurli stage III challenge (Kill 1000) and try to progress this whenever I am at Crystal Palace. I had 500PED of Universal Ammo with me, and set out to use as much as it would take to expire my A105, 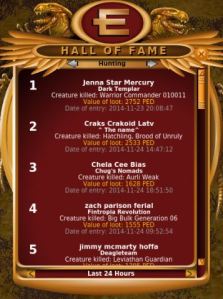 loot was poor and according to reports had been all day but unusually I had a good feeling about things and not too long into my hunt was rewarded with a very poor global. Still I felt good and kept going and just 5 minutes later a pretty decent HoF occurred taking me to number 3 on the board. Later still a second (slightly better than the fist) global was acquired. Shortly after my A105 was in need of repair, as things seemed to be going my way I dusted off my portable repair unit, fully repaired the A105 and continued to slaughter the Aurli, however my luck had run out and I did not get any more loots big enough to register as globals however one was in the 40 PED bracket. During this phase of the hunt I found myself in an area where the Aurli seemed to be spawn and at times I had 5 or even 6 of them attacking me, I survived this most of the time but did visit the revive twice.The second time the A105 expired I left the field of battle to asses my loot, and quite a good haul it was too, one full TT DOA Slugstorm (L), a shed load of shrapnel and a lot of ammo comprised most of value. The Ammo was sold, the shrapnel converted to Universal Ammo and the Slugstorm put in vehicle storage to be either auctioned or stuffed into Pamela when I visit Calypso and remember.

Nothing happened until Friday when I paid another visit to the Aurli, this also went quite well with only a small loss and it brought me to 819/1000 of the Aurli stage III mission.

I was feeling lazy so I TP’d to the surface of Calypso where I had a few things to do including naming my old snablesnot with a collar, I called him Spondulics. I visited Calico and Billy’s new apartment in TI City, which was nicely appointed. I also purchased a pair of Hoplite Armbands, finally completing the set.

After I was invited to one of Drop Zone’s famous Opalo Proteron hunts and I joined for the duration which turned out to be an hour making a very small profit and remembering how not to get killed, although I came close a couple of times. Casper, Drop Zone’s leader added me as a friend and we had quite a long discussion about several things including daily missions and hunting with some heavy hitters. After which I decided to do the Feffoid Cave mission to gain only my 3rd daily token although I’m sure I’ve done the cave more than that!

Saturday, I tried the Proteron solo and found I could do the young OK although there was quite a lot of healing involved I got 2 globals out of them the second one of which was very nice for a global and I managed a decent profit on the session. Latter it was Space Skilling Saturday, where I managed to lose just 2.6 PED hunting the Cosmic Horrors, a good day.

Sunday, I descended to the surface of Next Island and headed straight to Ancient Greece where I managed a few Steropes Cyclops to add to the mission, I need to kill 333 and have 5, this is going to be a long haul as they are tougher than me with my Archon’s sword and the Hoplite armour, I desperately need a healing squad. The present tactic is to pick out the weaker ones and then back towards he teleporter whilst attacking, I die at least once every time but this way I have less distance to travel to continue the attack after I revive and return to the scene and hopefully the Cyclops will not be too close to any others. A hard mission this one. I also did a few Brontes Cyclops just because they are easier. This hunt continued into next week but I’ll not make you wait for the result, the Cyclops beat me fair and square.

This site uses Akismet to reduce spam. Learn how your comment data is processed.